The University of Copenhagen and the protein producer European Protein have published a scientific article concluding that a combination of fermented rapeseed and seaweed in the piglet feed can improve the gastrointestinal health of piglets relative to unsupplemented feed. Despite the results, the pig producers are advised to use the seaweed in the sow feed instead of in the weaning feed and to use fermented rapeseed for piglets.

POSITIVE RESULTS WITH RAPESEED AND seaweed FOR PIGLETS

In July 2021, Copenhagen University and European Protein published a new scientific article in the Journal of Animal Science and Technology.

With the coming ban on therapeutic Zinc Oxide (ZnO), novel ways of enhancing piglet gastrointestinal health are much needed, and the results were therefore promising.

The seaweed and rapeseed trial included 690 piglets fed zinc-free weaning feed made from:

The result of the study showed that piglets fed a standard diet supplemented with 2,5% fermented rapeseed and seaweed had a more diverse microbiome, a reduced number of intraepithelial lymphocytes (IEL, indicating reduced inflammation). In addition, their blood contained less blood urea nitrogen (BUN) relative to the piglets fed the unsupplemented diet.

The mucosal layer or gut barrier was measured. Results showed that piglets fed a diet supplemented with 2.5% fermented rapeseed and seaweed had a thicker mucous layer in the colon than piglets fed SPC+0%. The mucus layer helps to keep bacteria away from the colon epithelial layer, which separates the gut and the bloodstream.

A diverse gut microbiome is a good general indicator for gut health.

-If you compare the gut to a bus, a diverse composition of bacteria can take up the seats. As a result, pathogenic bacteria or other bacteria negatively influencing the piglets will have difficulties colonising when all seats are taken, making the piglets less susceptible to infections, says Dennis Sandris Nielsen.

In the trial, piglets fed the fermented rapeseed and seaweed diet overall had a more diverse yet evenly distributed gut microbiome diversity compared to the feed consisting of SPC+ 0%.

According to European Protein, myths about fibre being counterproductive for suckling piglets is a thing of the past. With a balanced composition of soluble and non-soluble fibres, the transition from milk to solid feed can be eased through fibres. Non-soluble fibres function as feed for the gut bacteria, and as the study shows, a fibrous feed has several advantages for gut health.

The trial showed that piglets fed fermented rapeseed and seaweed had more Prevotella-bacteria in their gut microbiome. This type of bacteria helps digest fibrous feed; A great advantage when you want the piglets to transition to a cheaper and more fibrous feed after weaning.

When the fibre-degrading bacterium Prevotella stercorea breaks down fibre, it produces short-chain fatty acids, which are involved in many processes beneficial to the piglet.

Seaweed has anti-inflammatory and antipathogenic capabilities, which are beneficial for the piglets. Still, according to European Protein, the pig producers are better of using seaweed in the sow feed instead of in the piglets’ feed.

The sow is responsible for two-thirds of the health of the piglets. By feeding fermented rapeseed and seaweed to the sow, the health benefits affect both the sow and the foetuses during gestation and the suckling piglets during lactation.

When using seaweed in the sow feed, the pig producer gains the advantage of better reproduction and healthier suckling piglets and weaned piglets.

In another scientific article from 2020, Copenhagen University concluded that fermented rapeseed with the commercial name EP100i was: “As good as medicinal zinc”.

The trial was published in the journal Animals and showed that EP100i in the weaning feed had an even better effect on piglet health than weaning feed added medicinal Zinc Oxide (ZnO). Furthermore, compared to a weaning feed with seaweed, EP100i improved weight gain at a lower cost. Consequently, EP100i is the piglet feed recommended by European Protein for zinc-free weaning.

In another project, the University of Copenhagen and European Protein are mapping the health status of sows on Danish farms. So far, the project has compiled blood and faecal samples from more than 45 farms before and after feeding EP199, a functional protein consisting of fermented rapeseed and two types of fermented seaweed.

The project was initiated because trials from Lublin University showed that the production parameters of sows and offspring could be improved significantly by adding functional protein to the sow feed. Consequently, European Protein chose to start a research project led by the University of Copenhagen to document the effect of EP199 on the gut microbiome of sows and piglets and link this to production performance.

-As far as we know, it is the first study of its kind that both scientifically and practically tests the influence of feed on the gut microbiome, blood parameters and the relation to productivity results on as many farms.

The vast amount of data is gathered in a database administrated by the University of Copenhagen. According to Dennis Sandris Nielsen, the data will help study the relationship between feed, gut microbiome, and productivity. The first results have already been analysed and are expected to be published by the end of the year.

Preliminary analysis shows that the inclusion of EP199 in the sow diet increases gut microbiome diversity compared to the microbial diversity before feeding the sows with EP199.

The project data currently envelopes productivity parameters for 456 sows.  Initial results show that sows fed EP199 on average two to three piglets more per sow per year. The weaned piglets weigh 500 grams more, likely caused by an increase in the sow milk yield. Pig producers experience those suckling piglets are more uniform and viable at farrowing. The feed consumption per produced piglet has dropped by up to 15 per cent. 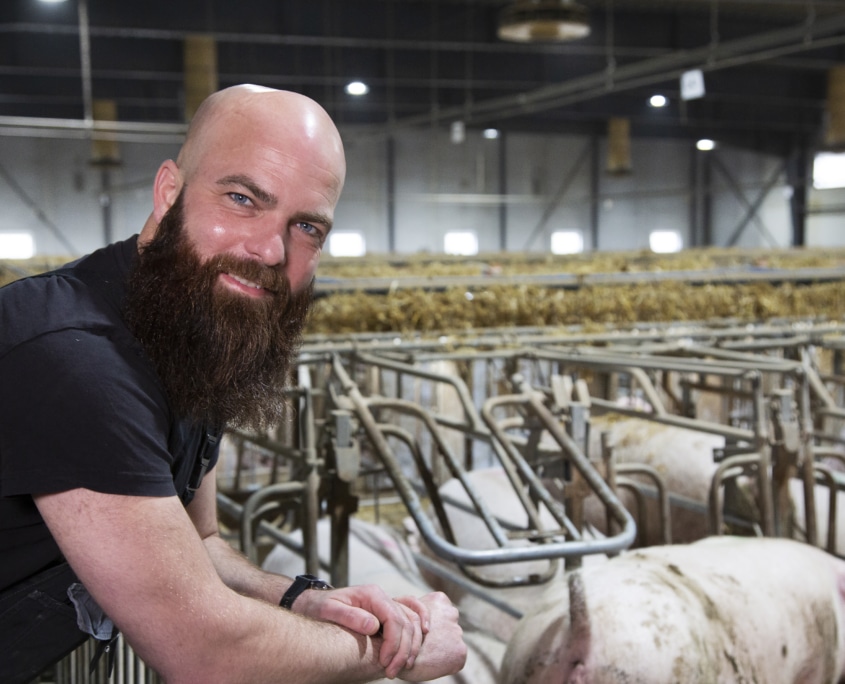 Jonas Juhl from the farm Kjær Knudsen Give uses EP199 for his sows to increase stability.

Farm Manager Jonas Juhl, who is responsible for three farms in the Kjær Knudsen Give Group, talks about his experiences with EP199:

-It has indeed been a game-changer. We have far more stability in our sow herd, higher milk yield and more uniform and vital piglets. Sow mortality has dropped by up to 20%.

IT TAKES TIME TO IMPROVE GUT HEALTH IN SOWS

A developing gut microbiome can more quickly be modulated by feed than an established gut microbiome. The older the sow and the higher the bacterial pressure on the farm, the longer it takes to establish a healthy gut microbiome.

-It typically takes 6 to 12 months before you see the results, explains Jens Legarth from European Protein.

– Many see changes after six months, but the most evident changes happen after the sow has been through two reproductive cycles. The reason is that when a sow comes into heat with a healthy microbiome, in good condition and without low-grade inflammation, the sow releases more eggs and gives birth to more vital piglets, says CEO Jens Legarth.

The CEO encourages all pig producers to start now:

-Producers with high bacterial pressure have a much greater challenge with Zinc free production. Therefore, we recommend that producers start where their efforts matter the most for piglet health, namely at the sow, before experimenting with the weaning feed, Jens Legarth finishes.

European Protein is a Danish family-owned protein producer. We work to promote health and productivity for animals through functional and sustainable plant proteins. The company was founded in 2010 and has protein factories in Denmark, Ukraine and the US.

THE SOW HELPS WITH ZINC FREE WEANING LOSING TIME AND MONEY ON HARD WATER FOR YOUR PIGS?
Scroll to top